I was introduced to the term déjà vu from The Matrix. This is how the scene unfolds:

[Neo sees a black cat walk by them, and then a similar black cat walk by them just like the first one]
Neo: Whoa. Déjà vu.
[Everyone freezes right in their tracks]
Trinity: What did you just say?
Neo: Nothing. Just had a little déjà vu.
Trinity: What did you see?
Cypher: What happened?
Neo: A black cat went past us, and then another that looked just like it.
Trinity: How much like it? Was it the same cat?
Neo: It might have been. I’m not sure.
Morpheus: Switch! Apoc!
Neo: What is it?
Trinity: A déjà vu is usually a glitch in the Matrix. It happens when they change something.

Now let us leave The Matrix for now and enter the real world. I mean our world, and I am not Morpheus. We had a lot of issues with the quandrangular cat recently at my working place. Now don’t ask what a quandrangular cat is? If you don’t know already, you don’t need to know. Remember, in the first approximation the cow is a spherical object. 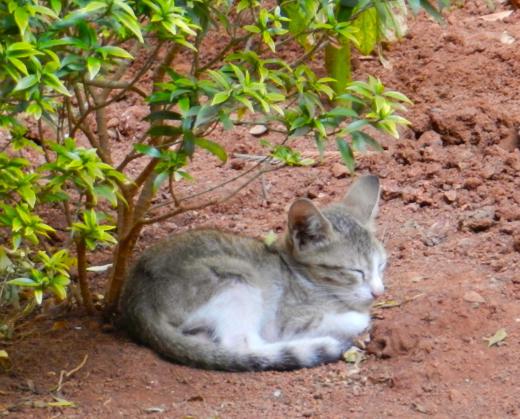 Circa, a few months back we had a sorry looking undomesticated cat, who was domesticated, nursed back to health, and attained zen (if you don’t believe me see the picture above (Picture Credits: Rafikh)). This was only possible by the warmth of many people’s affections and efforts. But unfortunately the cat overstayed, unwelcomed by some, on GoI property (without paying any taxes!) which wrecked havoc and created a red alert. To further complicate the matters, we could not for sure determine if the cat was a he or a she! The presence of cat in the campus was as good as an extinction event, extinction of one’s peace of mind and good vibes. that is. This called for extreme measures to show cat (and the ailurophiles ) their respective places. The entire drama was just short of executing the cat (and the ailurophiles ) in public. The cat was sent into exile, and if the reports coming in believed to be true, even there it is creating extinction events!

Now. Yesterday, déjà vu ! I see a similar cat in the same place approaching me similarly, well not almost as same as Neo’s black cat but quite similar. And I almost said as Neo does, (but I am neither Neo) “déjà vu!” First thing I thought was the déjà vu  in The Matrix. But then this is a déjà vu of déjà vu, and cats are involved in both of them. What is it with cats and déjà vu? Déjà vu  recursive, nothing more groovier than that! Four cats in all. The newer cat, which caused the current déjà vu , was smaller and in sorrier state and also approached me on the same table as earlier one. Unfortunately, I do not have a picture of the newer cat for comparison. Will this create another leela (pun intended), which would be another déjà vu for both ailurophiles and ailurophobes? Actually if semantics of earlier sentence are seen, then we come to conclusion that leela  and déjà vu are same 😛

Now it remains to be seen what has changed in The Matrix.

PS: This new cat seems to have set the ball rolling, it is already making people uncomfortable, causing extinction events!