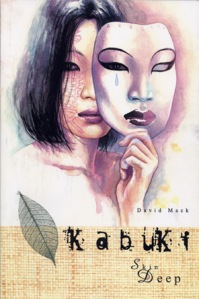 Kabuki is a comic series from artist and writer David Mack. It is about an assassin who struggles with her identity in near future Japan.

Kabuki is one of the 8 eight assassin in the Noh, a secret Government agency which balances the power in Japan’s underworld.
As far as the storyline is concerned one can trace a lot of influences on the art and the characters of the story [at least the ones I am familiar with]. Not to mention the industrial style that we see in Blade Runner.

The first Volume Circle of Blood tell us about the origins of Kabuki. The art form in this Volume is black and white. Some of the other volumes are in color. In this volume there is a strong influence from Lewis Caroll’s Alice in Wonderland.Especially in the Issue where Kai is killed by Kabuki the entire setup of the Mad Hatter’s tea party has been taken. When Kai takes Kabuki to visit his collections, the book that she picks up is Alice’s Adventures in Wonderland.
The passage she reads is this :

And I think I can relate very well to the quote of Kai on books [who has a formidable collection], when he compares the paper books with those that are digital :

But I love the intimacy of books. I love the physical act of turning
the pages and the tactile sensations of fine rice paper contrasting
with an embossed hardcover in my hand.

Influence from Carroll can also be found in other as pack of cards.

We are only faces, yet we are faceless… nothing but a pack of cards
in wonderland.

And in case of Kabuki when she says

I am a reflection, trapped in the world of a little girl.

It seems that David Mack has a fascination for M. C. Escher like I do. There are many influences of Escher in the later Volumes of Kabuki and especially in Metamorphosis. Incidentally metamorphosis is the theme in numerous Escher’s drawings, in which one thing transforms into another. Similarly in all the Metamorphosis issues the theme is of transformation. Also one of the characters is named M. C. Square which I think is a sort of tribute to Escher.
Also there is one quote in Skin Deep # 1 from Escher, which is quoted below.

The crossing of the divide between abstract and concrete,
representations between `mute’ and `speaking’ figures leads us to the
heart of what fascinated me. – M. C. Escher

In the later Volumes when Kabuki is in the reformation center, one cannot but help to think that there is an influence of Alan Moore’s V for Vendetta and thus indirectly of George Orwell’s Nineteen Eighty Four. Somehow I a find myself bumping into Orwell every now and then, is there a deep connection, or is this theory ladenness of data on my part?  Particularly the character of Akemi the way she builds up the morale of Kabuki has very strong resemblance in which ‘V’ builds up Evey’s mental state

If it can be taken from you, it was never you to begin with.
After they take away all they can what remains is you.
Only in these situations, we truly know who we are.

The passing of notes on Origami constructions of different animals also reminds us of the same modus operandi in case of Evey’s build up by the Actress in V for Vendetta.

Though the masks form an integral part of the style of the Kabuki dancers in Japan, the kind of attachment that our lead female Kabuki has with the mask resembles the character of V. Under their masks both have scars on their face, but as one the characters in Kabuki puts it

I think your scars are far deeper than the eyes can see.

Which I think is true in both cases of V and Kabuki. There is a trauma attached to the scar behind the mask, which they cannot forget, they do not want to forget. What they remember is revenge which RGV quoting in Rakhtacharitra [Blood History]  from Gita says:

Revenge is the purest form of emotion.

This post is not complete, will update it when time permits.

One must aim beyond the target. One must aim a long way. Our whole
life, our whole spirit travels with the arrow. And when the arrow has
been fired, it is never the end.

When in the company of deceptive hearts, be only honest, and your
opponents will fool themselves.

I am a reflection, trapped in the world of a little girl.

I am invisible, untraceable… like tears in the rain.

But I love the intimacy of books. I love the physical act of turning
the pages and the tactile sensations of fine rice paper contrasting
with an embossed hardcover in my hand.

But then, everybody has their own ghosts, don’t they?

Kai, is life a straight line or a circle?
Both and neither. It’s a spiral like your DNA.

There is no morality in virtual reality. What kind of person will he
grow up to be?

She is going to break your heart into two.
Its true.
Its not hard to realize.
She is going to smile to make you frown,
what a clown.
‘Cause everybody knows
She’s a femme fatale
The things she does to please
she’s just a little tease.

It is time to master duality of your nature you must decide who you
really are.

I play my games, but the hand of fate is much quicker than the lie.

Just as the locusts cloak the sun, my perceptions blinded me.

The warrior unencumbered and willing to go further than his opponent
would always win.

I swallowed the locusts, and with it my fear

Look at the swan skimming the water. Angel wings of ivory feathers, its
eyes veiled in a mask of black. Its beauty rivaled only by its very
own reflection. Ghostly and regal, it seems to glide effortlessly on
the ponds surface, but below the surface… its feed are peddling like
hell…

We are faceless pawns.
Funny thing about pawns. If they make it to the other side, they
become the most powerful player on the board. That is where I am
going. The other side.

I am armed only with the power that my physical presence commands.

I feel the burning of their gaze and it keeps me warm.

A voice in my head tells me the bullet had my name on it.
I tell the voice that they misspelled my name.

A city whose technology has surpassed its humanity.

If you gaze into eyes of the abyss, the abyss also gazes into you.

We are only faces, yet we are faceless… nothing but a pack of cards
in wonderland.

I am drifting in the dark halfway between the Sun and the Moon.

#1
Crying and laughter… pain and desire are sisters.

Time always catches up with you.

Never in words had I experienced the chilling satisfaction of words.

Nothing is black and white anymore, it all blurs together.

I used to get lost in the shuffle, now I just shuffle along with the
lost.

I think your scars are far deeper than the eyes can see.

The crossing of the divide between abstract and concrete,
representations between `mute’ and `speaking’ figures leads us to the
heart of what fascinated me. – M C Escher

The transformation takes place within our minds.

The only way to define your own identity is to be completely alone.

I don’t seek to find myself.
I seek to loose myself.
Escape is a burning hope.

If horror is not your friend it is your enemy.

If it can be taken from you, it was never you to begin with.
After they take away all they can what remains is you.
Only in these situations, we truly know who we are.

#6
Your yesterday is about to collide with your tomorrow.

Your environment reflects your internal disposition.

You can’t face the future until you resolve the past.