A couple of years back I shifted to a flat. We did not have a single plant in our house. So we brought a couple of pots in which to put some plants. We started with “money plant” but it seemed it did notlike growing in our window. We tried many other things but none survived. All of them would die, perhaps due to lack of sunlight or some infestation.

It so turned out that the sweet potato is not that sweet after all. It has a low GI (glycemic index). Some of the sweet potatoes that we had brought, and kept in the corner developed some really cool purple coloured shoots. We then thought of planting these and see. And grow they did. The shoots grew at an astounding rate, as if they were on some sort of steroids. Withinn a week they scaled the height of the window (~ 5 ft.). We had to manage them horizontally afterwards. But this was it, the plants became very dense and we planted some more. So we had a nice vine over the window. We never bothered to see if they
had grown any roots that we could eat. It was more used like an ornamental plant.

When we shifted to our current home we brought the pot with us. For travel, we had cut all the branches and left the root intact. But after coming the new house, where we had access to the sunlight. The plant did not grow, it died. That is when we planted some new shoots in the pot, two of them. And then forgot about them. We water them daily but, it was in a rather inaccessible corner of the balcony so, we could not look at it properly.

It so happened one day I noticed something strange. Something (most probably a bird) had dug out the soil in that pot and uncovered what was unmistakably surface of a sweet potato. There were beak like marks on the surface. It was like a treasure was exposed. I promptly covered the exposed area with extra soil. It was then that I noticed that the plant had grown a lot but since its branches were hanging low and at an angle than hid it from us, we had not seen them.

So, this is the background. Yesterday, being a Sunday we decided to take out the potatoes out. So what follows is a picture essay of uncovering the harvest of the sweet potatoes.

The Plant with its leaves. 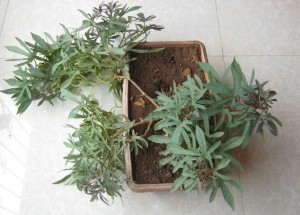 Put a paper on the floor to collect the soil. 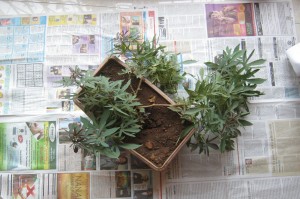 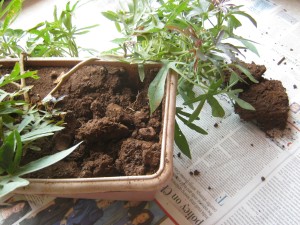 And they are out!

With the roots removed. 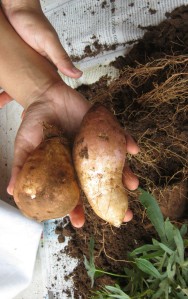 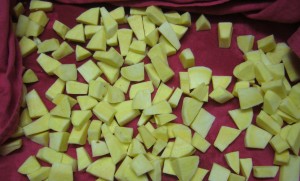 In the fry pan!

And with salt and pepper!

That’s it for now folks!