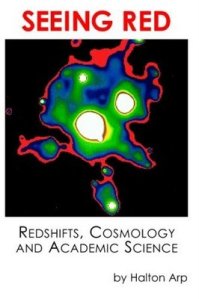 Recently I came across a book called Seeing Red by H. Arp.
The book questions the fundamental ideas in the Big Bang Cosmology.
The basic idea that is questioned is that the Distance-redshift relation; that
is the more redshift and object has more distant it is from us. This idea forms
the bedrock on which the Big Bang Theory rests. So questioning this idea is out
of question for the Big Bang theorists. But even when an observation occurs which
does not confirm these ideas, it is so to speak, swept under the carpet, literally. When
the data confirms the beliefs that they hold; namely the theory; then the instrument is
working fine, when it does not, it is noise; the instrument is faulty.

Also it points out in the red tapism in the scientific community, where one follows
the leader or gets isolated, as  is the case with Arp. The opaqueness in the `peer review’
process is higlighted by numerous examples which arp cites in his interactions with
editors and referees for the prestigious journals in Astronomy. The very value of democratic
process in science is under question, so are the naive ideas of Popper who thought that scientists
always try to falsify their own theories. Here it seems it is the opposite case, with scientists
trying to suppress the observations which contradict with their own pet theories, by all
possible means, most of them un-ethical for a scientist, at least in theory. Along with the
journals, the conferences are also exposed, in which only the already set theories are entertained
with no data which questions the popular theories are allowed to be shown, which is the very
spirit of science. When every thing else fails the integrity of the person is under question.

The last chapter is a must read for all students of science.
Here are some of the quotes from the text:

**
09
“No matter how conclusive the evidence, we have the power to
minimize and suppress it.”

12
Scientists, particularly at the most prestigious institutions, regularly suppress and ridicule findings
which contradict their current theories and assumptions.

The average astronomer, however, would look at them and start to
argue that they must be accidental, because astronomers now feel
compelled to fit the observations to the theory and not vice versa.

13
But no matter how intimidatingly complex the calculation, no
matter how small the probability of accident may be, the
calculation does not tell you whether the result is true or not. In
fact, no matter how significant the number is, scientists won’t
believe if they don’t want to.

14
A reasonable response would be to notice such a case and say,
“If I see a few more cases like this I will have to believe it is
real.” Most astronomers say, “This violates proven physics
[i.e. their assumptions] and therefore must be invalid. After all,
no matter how improbable, it is only one case.”

17
The paper was also testimony to the fact that sensible analysis
of observations was being blocked and ignored, while the high
profile journals were submerged with a flood of elaborations of
incorrect assumptions which prevented anyone from remembering
anything important for more than a few years.

Clearly, the main purpose of these “review of the theory talks” was
to fix firmly in everyone’s mind what the party line was so that all
observations could be interpreted properly.

Shortly thereafter, the Space Telescope Science Institute
announced it was suspending the amateur program because it was “too
great a strain on its expert personnel.”

Professionals start out with a theory and only see those details
which can be interpreted in terms of that theory.

The reason the point is so sensitive is that the influential people
in the field know what the observations portend, but they are too
deeply committed to go back. The result will surely be to inexorably
push academic science toward a position akin to that of the medieval
church. But if that is the evolutionarily necessary solution, then
perhaps we should hasten the process of replacing the present system
with a more effective mode of doing science.

“Well I know you can’t be right, but I will help you where I can.”

Martin Elvis from the Cambridge Center for Astrophysics (CFA)
jumped up and said, “That’s noise.” I argued that you could see that
it was not noise.

One thing has been accomplished, though. I now understand what
should be called the statistics of nihilism. It can be reduced to a
very simple axiom: “No matter how many times something new has been
observed, it cannot be believed until it has been observed again.” I
have also reduced my attitude toward this form of statistics to an
axiom: “No matter how bad a thing you say about it, it is not bad
enough.”

“If you are wrong it doesn’t make any difference, if you are right it
is enormously important.”

I feel very strongly about what happened and I want to make my
position clear: Astrophysical Journal Letters is the normal journal
for publishing new observations from the Hubble Space Telescope. The
telescope cost billions of dollars of public funds. The vast
majority of page charges which pay for the publication of the
journal come from government supported contracts. The overriding,
first directive of the editor is to communicate important new
astronomical results. If the editorial process violates its primary
responsibility, it misuses public funds.

But the fatal flaw, it seems to me, is that people who are
interested in power are spurred by emotions which interfere with
their reason.