1
~~
I am currently working on deploying OLPCs [One Laptop Per Child] a.k.a.
the $ 100 laptop a.k.a. XO in India. The Green colored laptop looks
pretty with children being very happy to have one, and what is best
is that the children or their parents do not pay for it, but the
child gets to keep it, take it home and play with it! 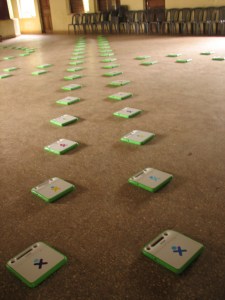 The first pilot was started in Khairat, sleepy tribal village about
60 kms from Mumbai. This will be the third year in Khairat. So a
generation of children are present who have been using the XO
consistently. Though we got on to this project last year, the Sugar
platform I already knew about. The parents tell us that the children
have developed special affinity with their laptops, at times even
not allowing their elder siblings to even touch it. Pedagogically
the support at Khairat has not been so good. The teacher their
Mr. Surve learned most of the activities with the Sugar on his
own. Along with the new and some upgraded activities, but thats
another story. 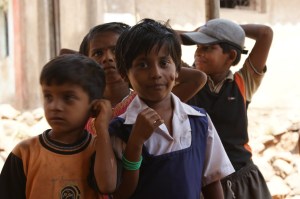 One of the consistent problems that was faced in Khairat is how do
you charge the laptops. Though these laptops consume quite a less
amount of power as compared to normal ones, the fact remains that
they run on the battery and batteries tend to dicharged when
used. There was some solution provided in terms of a rotating wheel,
wherein a dynamo is used to charge the XOs. But this did not work
out well. The Khairat school is not very large about 23 students
across all the 4 grades of the primary. So to charge all the laptops
at the school, we needed to have 23 plug points, to put the cute
little green chargers in! If you scale it up, if you have to have lets say 100
deployments then, 100 plug points! The OLPC design team came up with
a charger which can charge upto 5 laptops, but then we need to
import that too, with the XOs. What we wanted is to charge a large
number of XO’s at one go. The desiderata was that technology should
be indegenious, cheap, and should be `open’. Open is used here in
the sense of being transparent to anyone who wants to repair or know
its workings. Also the problems of the charging at Khairat were
compounded by the fact that many of the chargers had gone bad. The
things were so bad that for the entire class of 23 students they had
only 5 working  chargers, so that the students could not charge the
laptops, the scheme that was implemented in this case is that the
children would bring the laptops to the school, charge it there turn
by turn. All this was further complicated the `load-shedding’ of the
Electricity Board. The schedule of the electricity board is such
that it does not allow for continuous charging.

The first option that we tried was to get a similar charger from
Lamington Road. When we enquired we got one for about 200
rupees. But even if we get 20 of those, we did not have enough plug
points in the school. And even if they were there, the lenght of the
wire on the chargers isn’t much, so the students have to sit close
to the extensions. This isn’t by all means a very good idea, AC 230
V all near kids, in primary. Many of the chargers had bare wires,
and accidents can always happen. But this still doesn’t solve our
problem of mass charging. We needed a charging station. Since we did
not have one, we had to design one.

We tried to take a supply from a
We found that the rating on the chargers required them to charged
with above 6 V. What could give us a continuous supply of regulated
power and was cheap?

Jude had an excellent idea. We use the standard SMPS [Switched Mode
Power Supply] which powers the regular desktops to charge the XOs. The
main purpose of the SMPS is to provide a regulated DC supply from the
AC mains, to which it is connected. The standard SMPS comes with two
levels of DC voltage as the output; one is 5 V and the other is 12
V. To operate a computer and its various parts both are needed. The 12
V supply is given to parts like the motors which operate inside the
HDDs. Whereas the 5 V supply acts like the logic 1, 0 V being
logic 0 for the binary operations to be performed on the digital
devices, that is the transistors. The current capacity of the SMPS is
about Amps. This is more than sufficient to safely charge about 10
XOs. So from one SMPS we can safely charge 10 XOs.

So what we did was to get the SMPS about Rs. 440 at Lamington
Road. Derive a power cable from one of the many outputs given
there. Then from that one output we would need to draw 10 outlets for
charging the XOs. The number 10 seemed to be reasonable to be drawn
from a 400 W SMPS.

Anyways so the steps for the construction went as follows:

Draw the 12 V supply from the SMPS, that is, the yellow wire and the
ground, the black.

The first thing that we did was to cut the first main wire for about a
metre. This wire was of 25 guage, the gauge has to be high for the
main cable as it has to draw power for all the 10 XOs.

Now for connecting the main power cable to the SMPS, we needed the
female connectors and join this to the output of power supply. This is
the same thing which goes inside your IDE drives. But in this case we
wil be deriving the 12 V supply and not touching the 6 V
supply. Making this connection requires a bit of skill, as we
discovered later, the joints were shaky, even after all the crimping
that we did. They had to redone at Jude’s office.

Now after the first metre of the main power cable, we attached 4 more
wires, 2 black and 2 red. One each black and red wires were braided
and ended in the DC jack for the XOs. So at the first `T’ joint we had
two outputs for the XOs. For the joint itself, we had 8 wires coming
there. So we soldered the wires. Jude suggested that we could get what
are known as `shorting caps’ for making the final product. 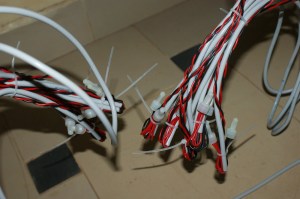 Now this step was repeated for the remaining 4 `T’s. So at the end
voila we had a mass charger for the OLPC.

So we tested our creation with 10 XOs, being charged simultaneously by
the charger. But there was a problem, the joints started to heat
up. There was a short some where in the circuit. We did not test for
continuity. So we had to redo the entire thing again. 😦

The short was finally found in one of the DC jacks, which when twisted
and pressed, had a protrusion which actually punctured the other wire
and thus shorted the entire circuit. Finally after almost re-doing the
entire circuit, we were on our way to test our charger.

With all the XOs attached. The light on the battery indicator of the
XOs was red and amber. Then slowly after almost an hour, slowly one by
one, the XOs were being charged, indicated by the indicator becoming
green. 🙂 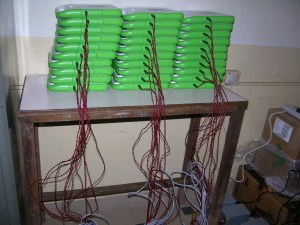 One thought on “A Mass charger for OLPC!”