I visited Boston for two weeks. As a bibliophile I was looking forward to the bookstores that the town has. As I am always on a budget, the aim was to find used book stores. So I got some recommendations from Louis and read some reviews. So have visited these stores so far (in order that I visited them) 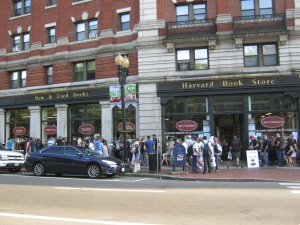 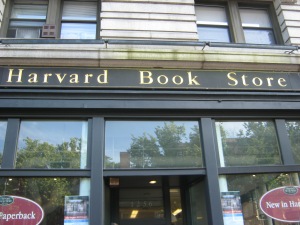 There was some  author signing event at the Harvard store, where people were waiting in a huge queue for the author to visit. The Harvard Store has a section in the basement in which they have used books. The prices are reasonable starting at ~ $2. There are some new books with heavy discounts also. The sections are arranged according to subjects, but you may find books out of their subjects in some parts. The science/mathematics section was okay, nothing really great, though I bought quite a few. One of the gems was a book by Lewis Carroll for $2.

The upper section has the new books categorized by subjects. But unfortunately the physical sciences section was dumped in an aisle between two sections to make space for the author signing event. Anyways, the books I brought from there are below:

Raven books visit was unplanned, but was on the agenda. Fate, I had to visit this shop.

We went to a Staples shop after Harvard Book Store. Right bang opposite this we spotted the Raven Used Books.

Inside the store, which is in the basement of the building book shelves full upto the ceiling of the store greeted us. The philosophy section was categorized according to author list. The collection was extensive and very well organised.

I got lost and forgot to take any pics. But Alpesh did, and below are his pics from the store.

I got these two books from Raven. They had a nice poster and bag for the store, which I have forgotten to take a photo of. Next visit in that region sure to take it.

Update: Raven poster and closeups are below.

The Museum of Fine Arts in Boston had a free entry day so we went there. Nothing specifically was on the agenda. When we went there The Great Wave greeted us. So it was here that I came to this was a painting by Hokusai. There was a Hokusai exhibit going on. Serendipity. I had seen the great wave as an fractal, but did not know about its origins. So here it was in full glory! The presentation was great.

Anyways, after roaming in the museum for a couple of hours, we got to the book store. There were many  books that I would have wanted but they were fairly expensive. Just before I was leaving I got a gem A Tolkien Treasury for $5, in a reduced price section.

The minimalist and the cleverly designed logo of the MIT Press is something that cannot be easily forgotten. I discovered the MIT Press shop by chance. We were walking out from Kendall MIT Train stop towards I saw the logo and bingo there was the shop.

I was in a hurry so did not go in the shop.

The next day we went to get coffee near the MIT store. And we saw two trays of books outside the store.

The prices were in the range of $3-$5. It had a small notice which said pickup your book and pay inside. This was cool. A sale at MIT Press shop!

Evening we went back to the store. The store is well stocked, and also has books from other publishers (I had thought it would be only MIT Press books). There was a section with discount.

The reviews of the books were handwritten small notes. You can see it in the picture above.

I got Mandelbrot’s biography for $6.95. And three other books. Books bought are shown below. 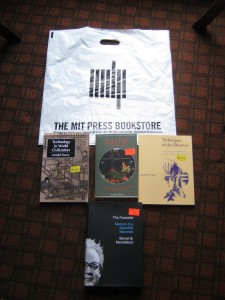 This was another serendipitous find. I had read it in the reviews. But when we went to downtown Boston, we were not looking for it. Inside a little lane I found this shop waiting for me.

This was one really well stocked shop. With books till ceiling all around. Books by subject, and authorwise too. Below are a few snaps from the candystore of books. The prices were okay, $6 was the minimum. They also have old prints kept among the books. The philosophy section was huge. The science section was a bit of disappointment, though there were some good books on HPS there. I got a newtons biography in the Canto series from there.

The store also has a resident cat named Dusty.

The arts section was great. I got a book on Durer’s life and work. And hardbound book of Graphic Works of M. C. Escher.

This was a really good find.

This is something that I discovered while walking out of the Harvard metro station. Serendipity. There was a spread of books under a tree with no seller to be found around. There was a box in the centre with a little handwritten sign next to it. The sign is produced above.

I collected a bookbinding book by Dover for $2. Dropped two one dollar coins in the box and was happy!