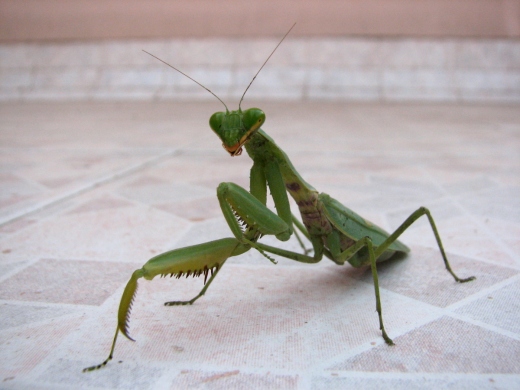 A mascot is any person, animal, or object thought to bring luck, or anything used to represent a group with a common public identity, such as a school, professional sports team, society, military unit, or brand name. [Source]

A few months back, while I was riding my Motorcycle to work, I noticed that a small green praying mantis was stationed on the speedometer. I thought it would move away once the bike starts. So didn’t give it much thought and started the drive. I have to cover three traffic signals to go to work. Now when I stopped at the first signal I noted that the little mantis was still there, holding on to the rim and the glas of the speedometer. As the signal went green, we started the journey again, this time we had appreciable speed as we  were on the highway. I was keeping a tab on the mantis, thinking that it would be flicked away by the air flow. It crouched and held on, no matter how much I accelerated. Its antennae went back with the wind and at times it really struggled to keep on the position. It looked as if it was determined to come with me (or lead me) to the workplace. A personal mascot for me! Leading me through my journey of life. When I finally came to my office, I placed it over the nearby shrub hoping the best for it. (Unfortunately, I did not have my camera at that time, so could not take any photos. )

Having a mantis as a mascot is not a bad thing at all. In the manga Baki Son of Ogre (Vol 2), the hero shadow fights with a mantis for practice, as by weight they are perhaps the strongest of animals. It is claimed that if the mantis was ~100 kg they could hunt a full grown African elephant singly (Note that manga are read from right-to-left). That is the ratio of their weights and size to that of their preys. Since a mascot is supposed to represent you and your qualities, these are no bad at all.

So I am all for a mantis as a mascot, after all, it choose me!

The photo at the top has another story to it. One evening I was just strolling on a terrace when I found this impressive specimen. I placed my camera on the ground to get closer and better photos. The mantis became aggressive
(too friendly??) and came on the camera itself, just after this photo was taken.

I am The Mitr, The Friend
View all posts by The Mitr →
This entry was posted in life and tagged mantis, mascot, motorcylce, praying. Bookmark the permalink.