In one of my evening walks along the Mooi river front near my house I noticed an unusually large dandelion like spherical seed pod. By unusually large I mean size of a tennis ball! 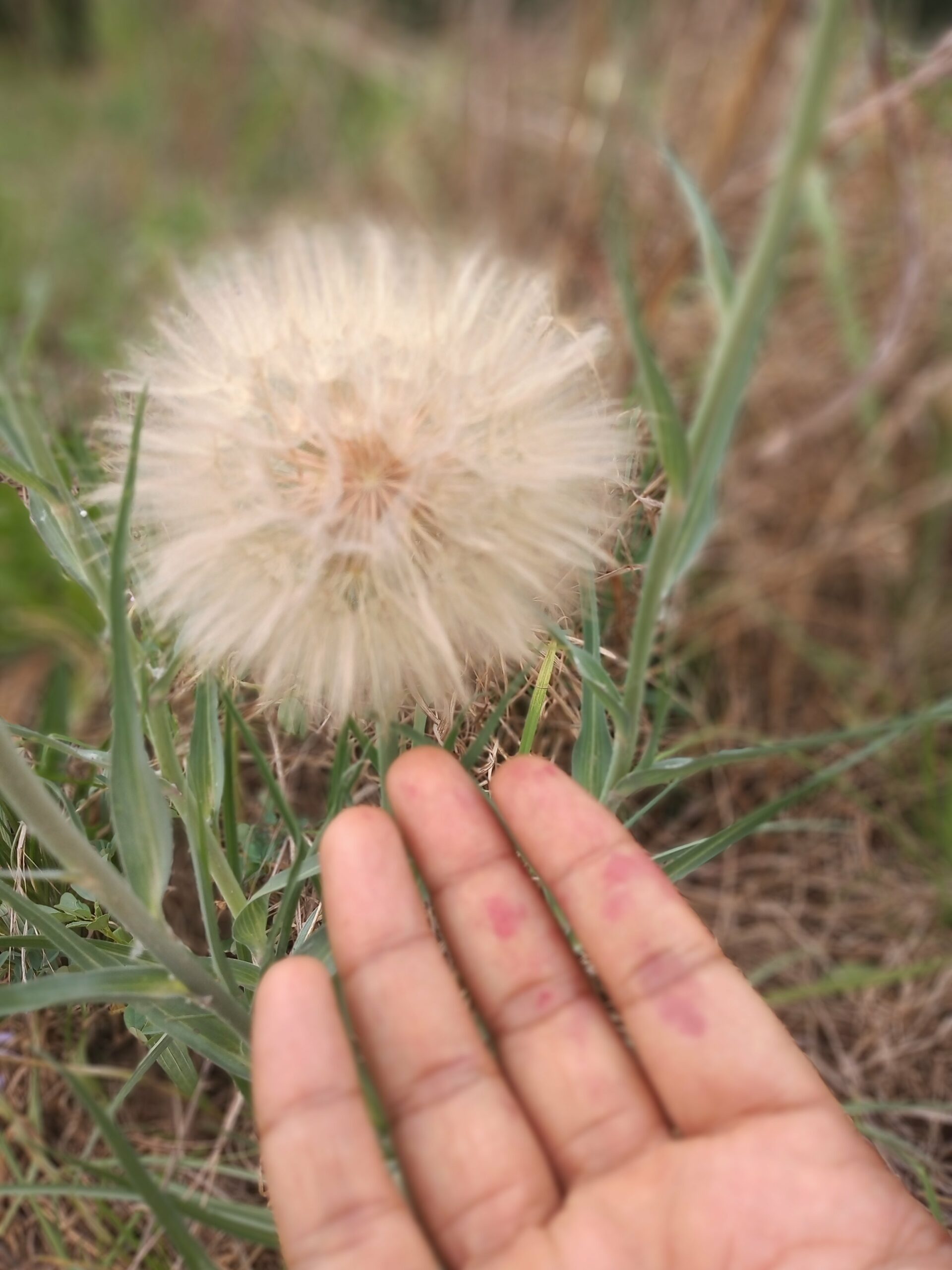 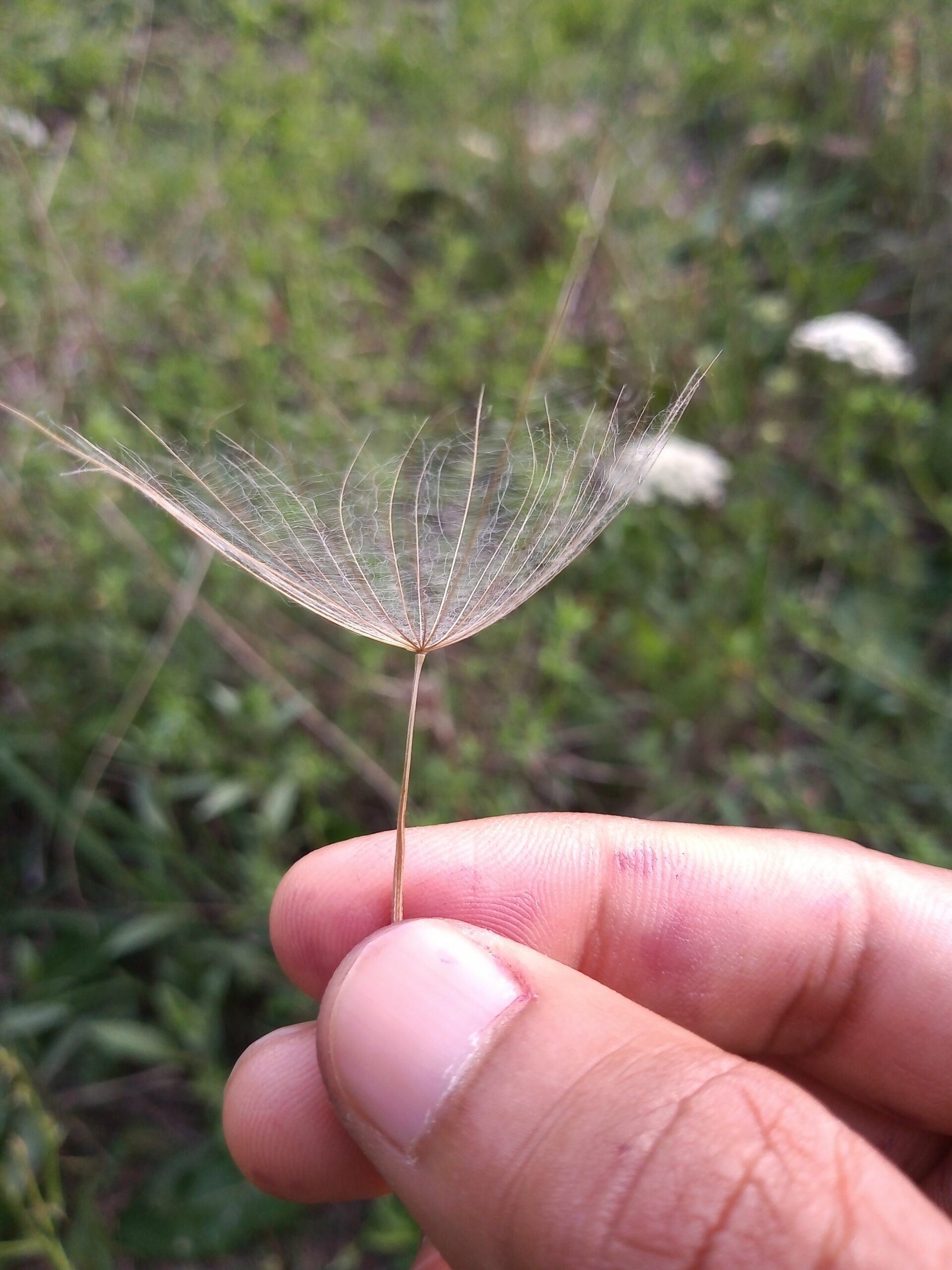 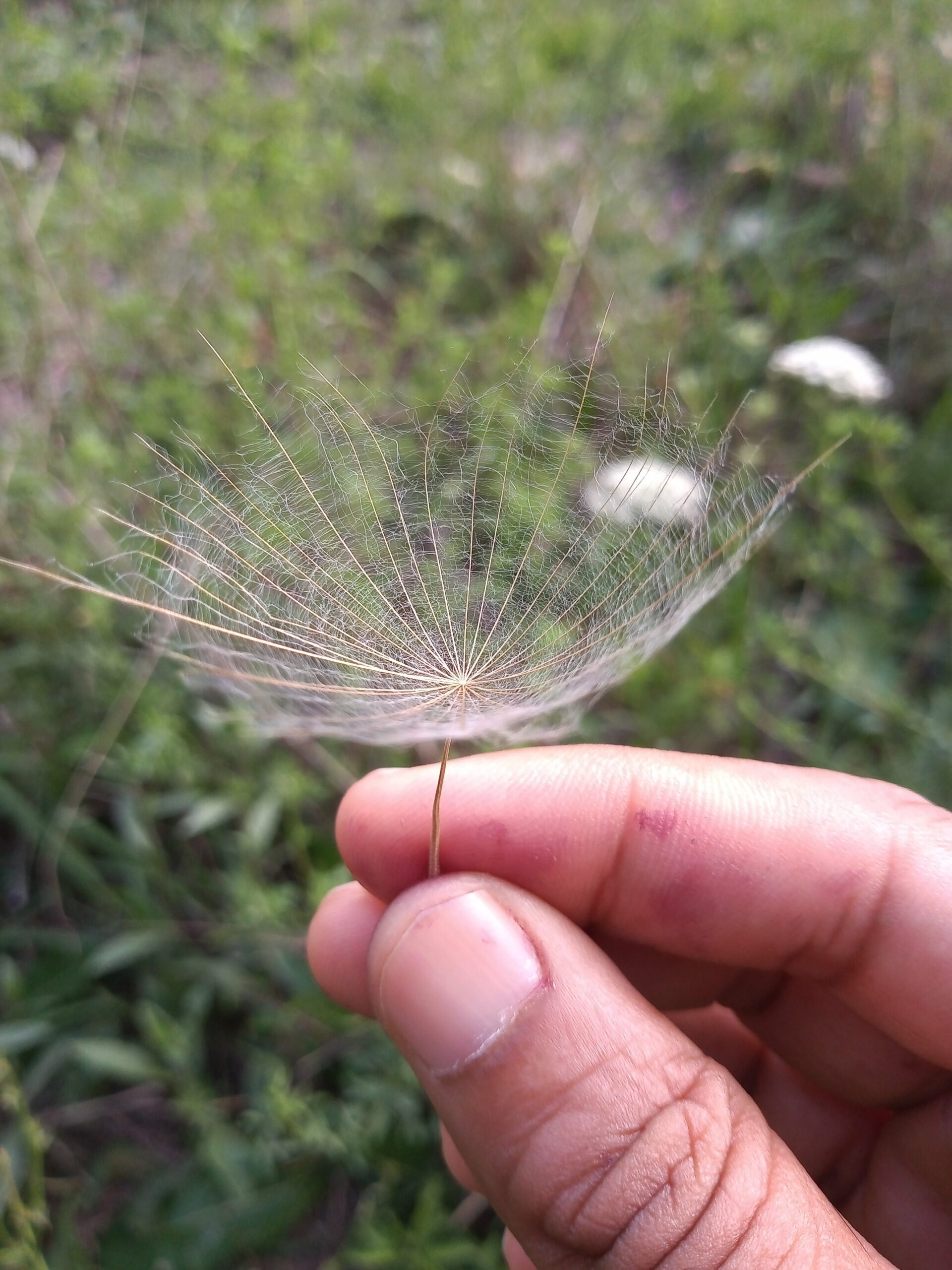 The red/purple marks on my fingers are due to mulberries growing on the river bank that I had picked and eaten just a while back. 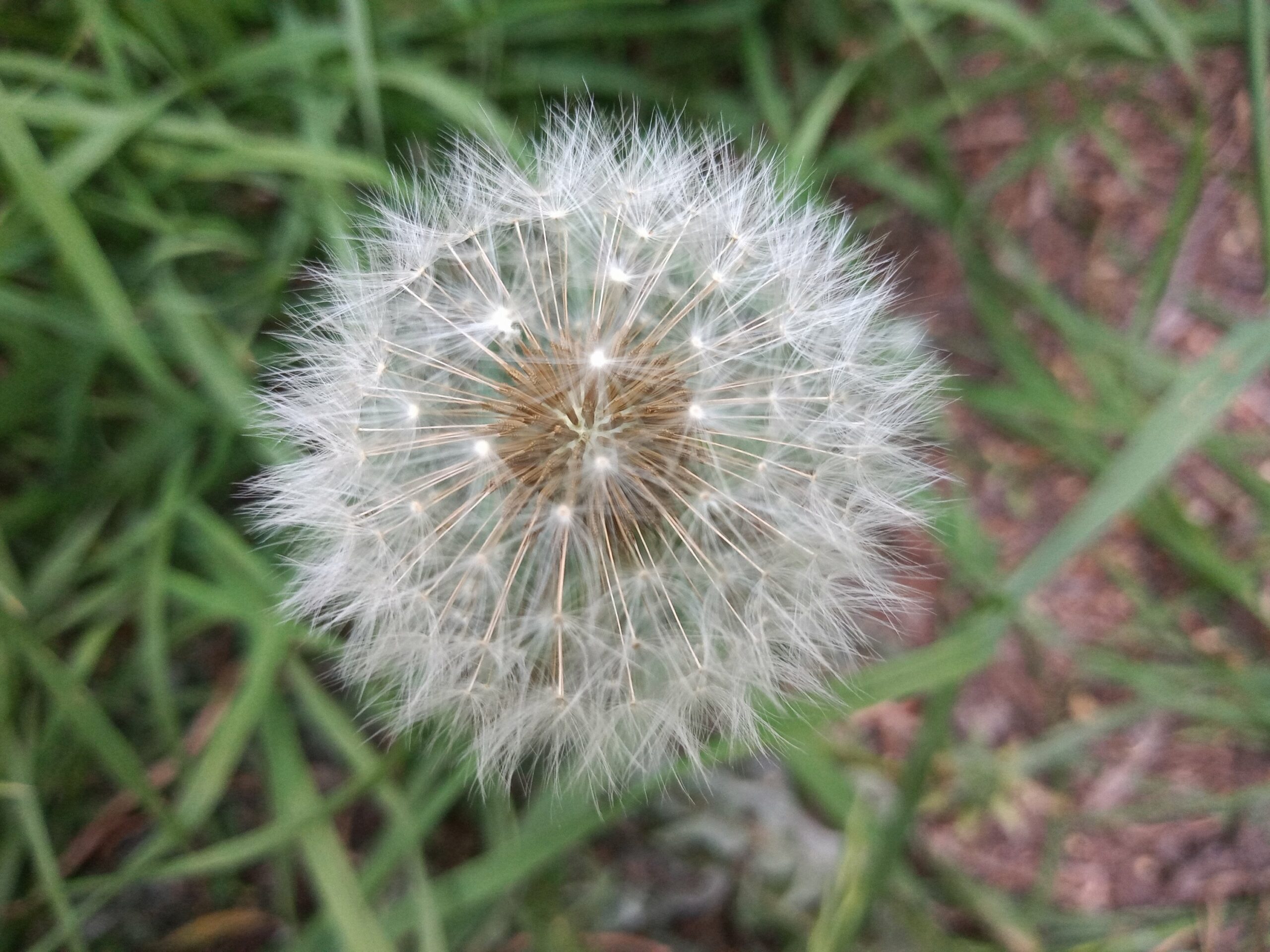 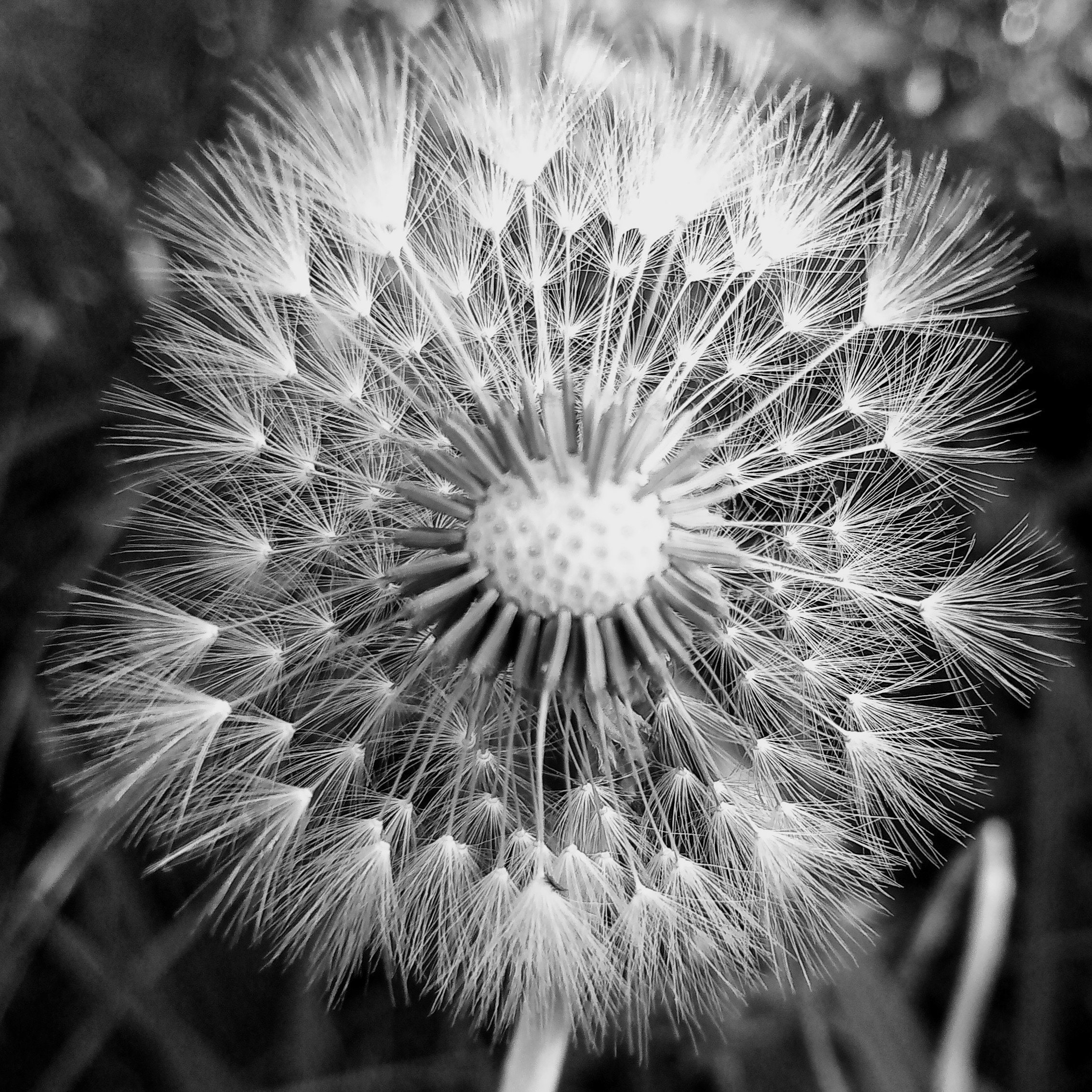 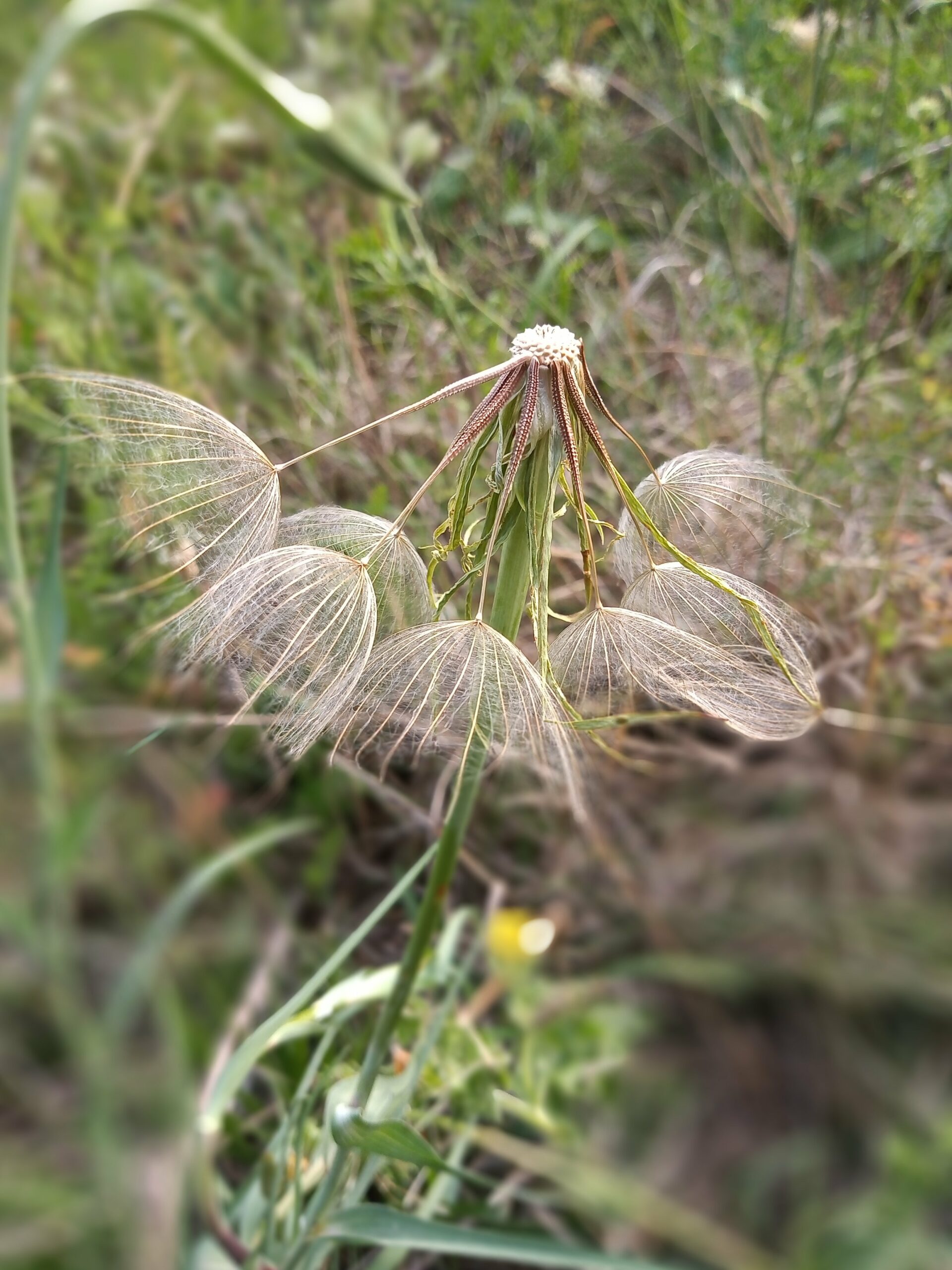 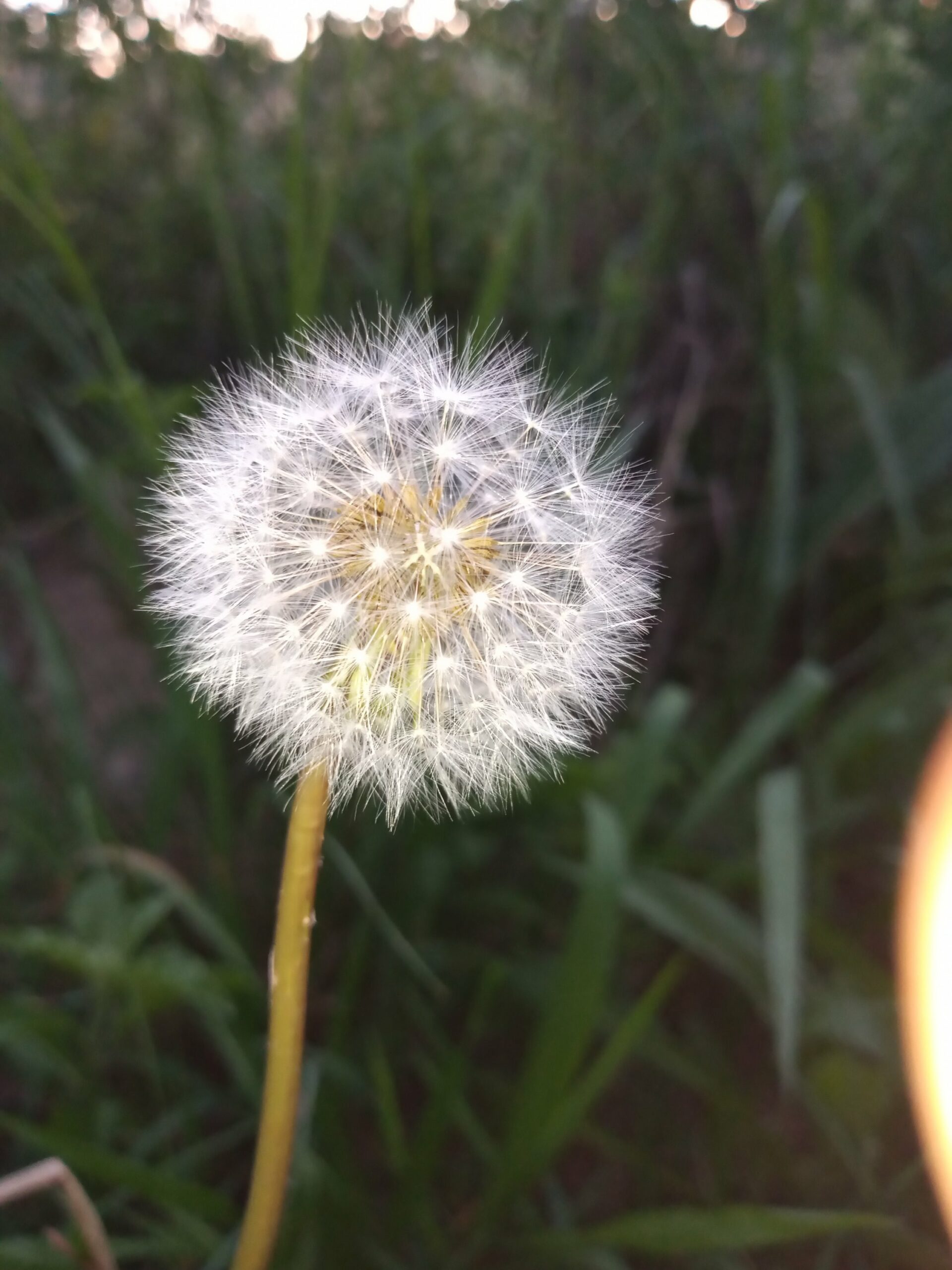 The usual spherical formations that I had seen so far were of the size of a centimeter or two in diameter, so this one was a huge one. The dandelion like seeds (pappus) are usually very delicate and have very fine structure. In contrast to the dandelion, these seeds were huge (scaled by at least 10 times or more), and even the construction seemed very robust. Instead of single hair like structures as in the normal dandelion, it had a net type of structure.

A typical dandelion. Where are the other half seeds gone to?

So I thought inductively, that whatever by this flower is it should have a proportionally bigger display. So in the coming days I like a professional stalker tried to “stalk” this flower. But this was something that did not succeed. It is perhaps to do with already knowing what you are looking for. I was not “seeing”, I was just “looking”.In philosophy of science there is a concept called theory ladenness of data. What this essentially means that there are no “pure” observations. We always need some background knowledge to make sense of these observations. The conceptv of pure observations was one of the conceptual backbones of the logical positivist approach to philosophy of science. They claimed that just pure observations can be done and can be used as a criteria for adjudging the correctness of theories. But several schools of thought conclusively showed that such pure observations are not possible. We always have a theoretical framework in which observations are done, with several declared and undeclared assumptions accepted as a part of that framework.In my case I didn’t know what the flower looked like. I knew what other dandelions looked like, so I was constructing my model of the flower on those designs. I had deliberately tried to avoid using the internet for the search. I mean I knew where the plant was so it would be trivial to find its flowers. But even for a couple of weeks of almost daily looking I would only find the tennis ball sized globes of seeds but not the flowers themselves. There was the proverbial smoke but I couldn’t see the fire.Now the thing was I was visiting this stretch of wilderness during the evenings. And then after two weeks of futile attempts to find the flower it stuck me that this might be a morning flower. So by the time I went in the evening the flower had done is business and had signed off. So this would be unlike other dandelions whose flowers persist for days and are operationally on through the day. So I decided to test this hypothesis the next morning. And voila there it was. I was expecting a grand flower which would do justice to the grand seed ball it created. But the flower was a damp squib. It was not at all grand to look at. I mean of course it was beautiful, but I was expecting a bigger flower. 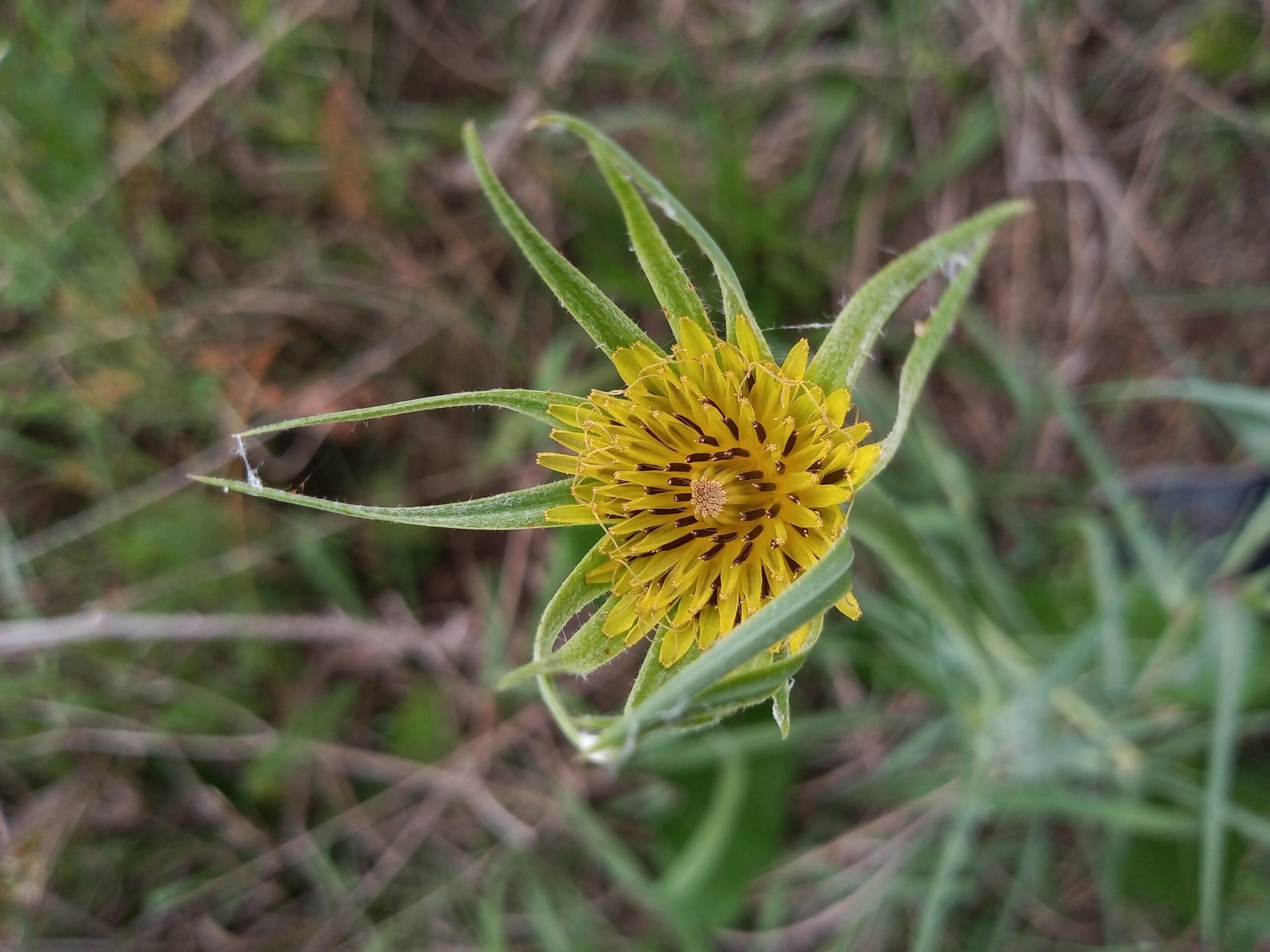 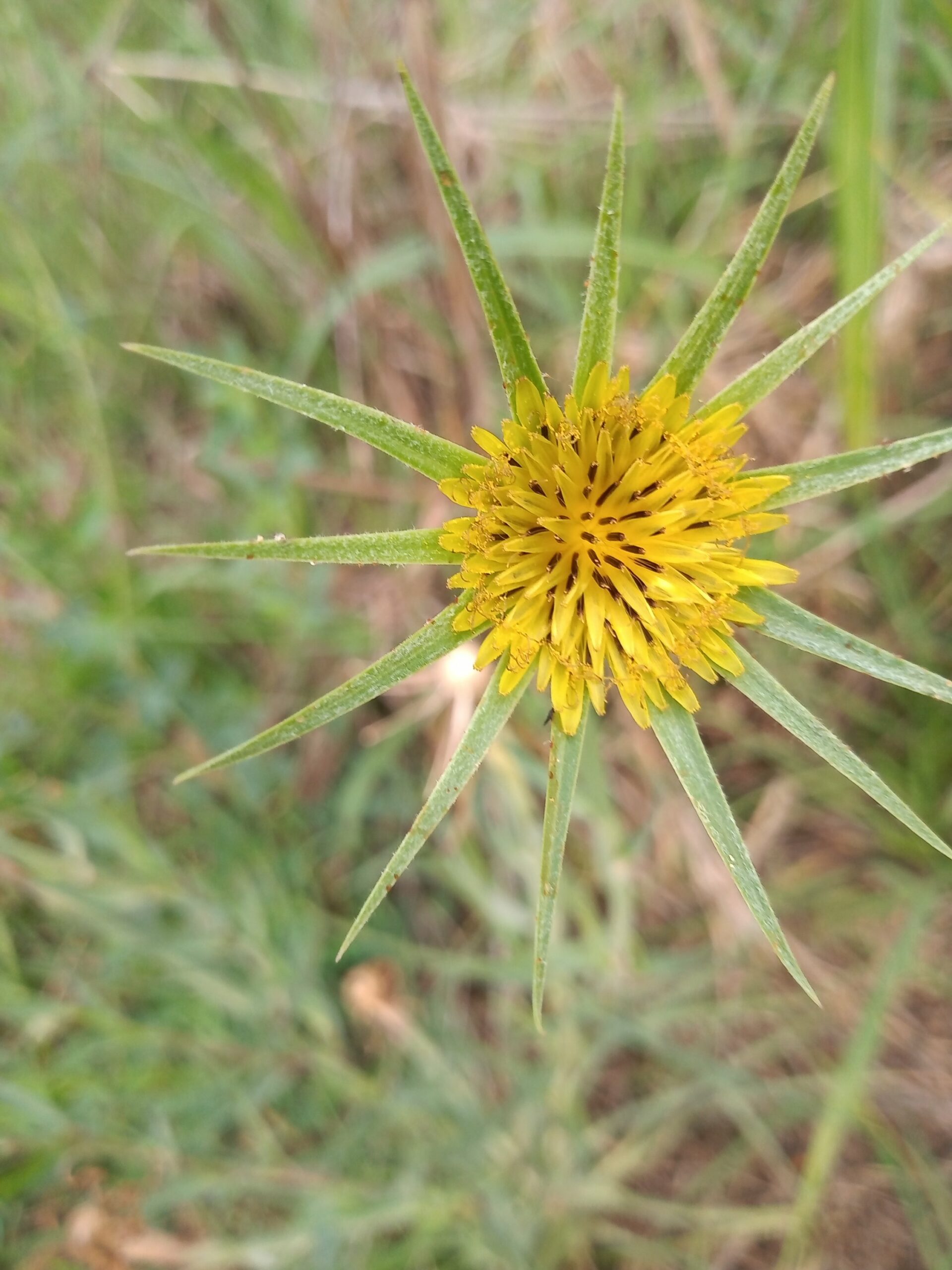 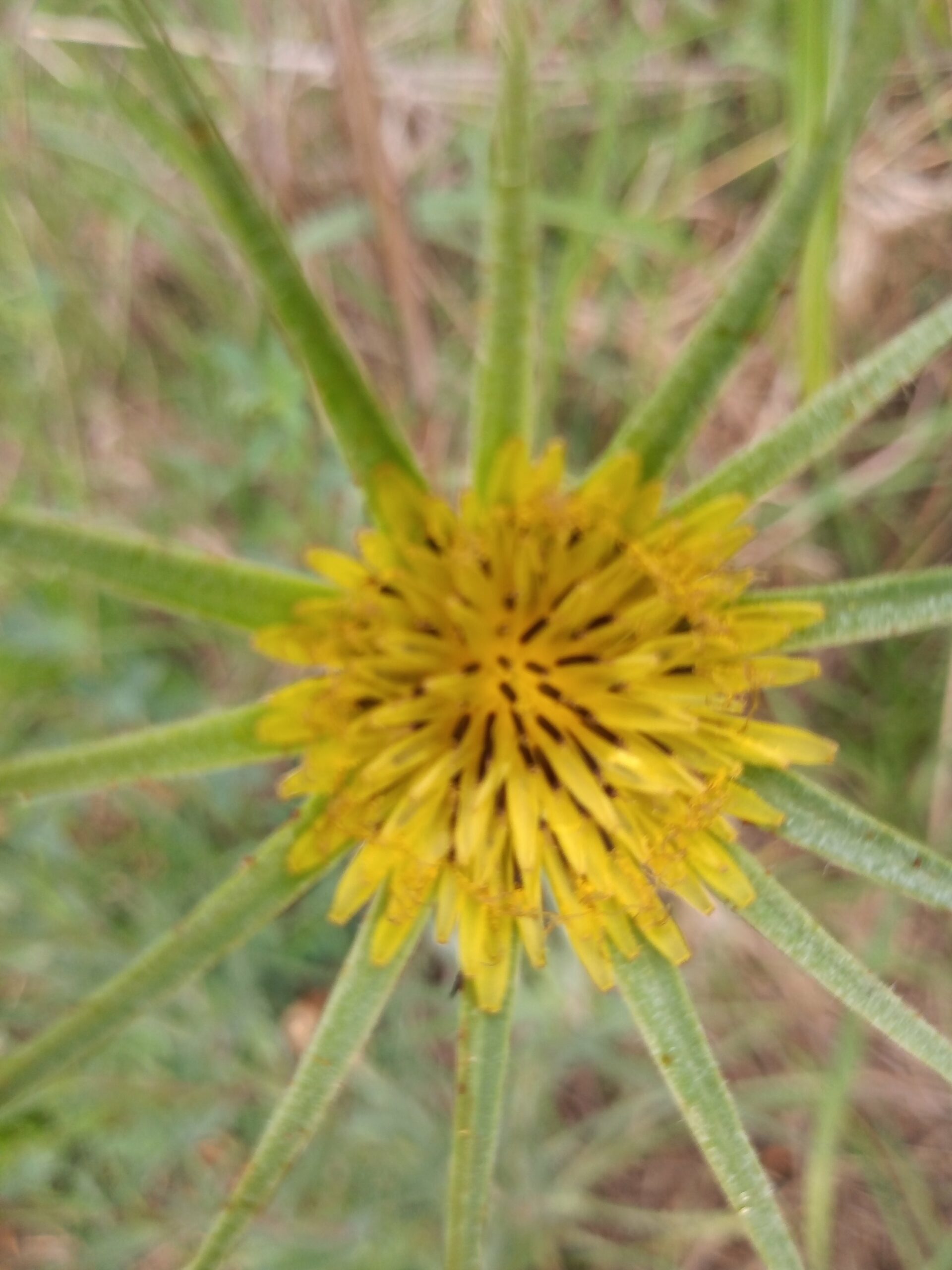 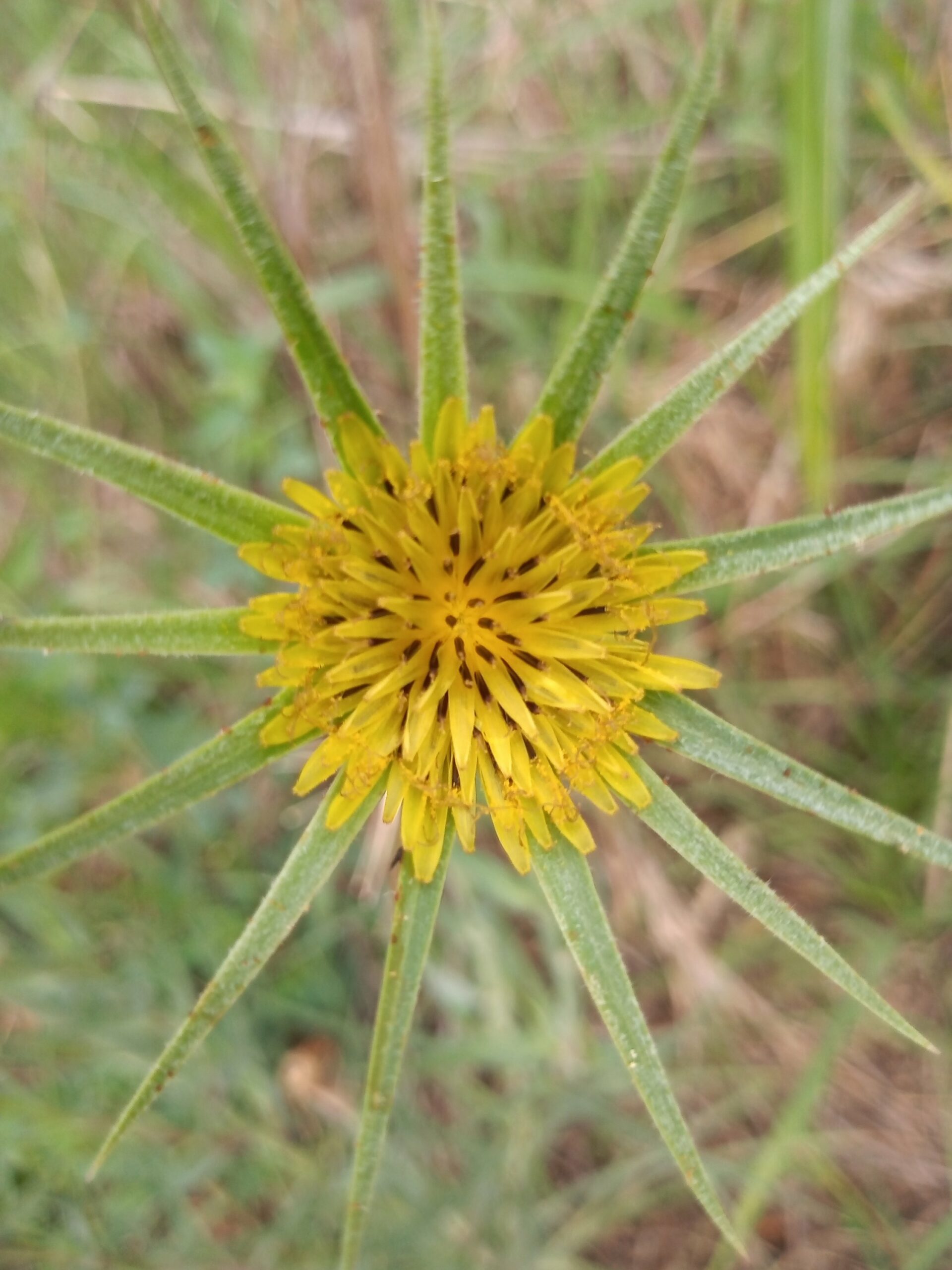 Now armed with the knowledge about how the flower looked, I was able to trace the flower from a couple of wild flower guides. The plant was Tragopogon pratensis. The plant is also known as goat’s beard and is but a native of Southern Africa. Thus concluded the mystery of the great ball of flying seeds. In the process I discovered a whole bunch of morning flowers which I did not know as I usually visited only during the evenings.

All images CC by SAhttps://en.wikipedia.org/wiki/Asteraceae