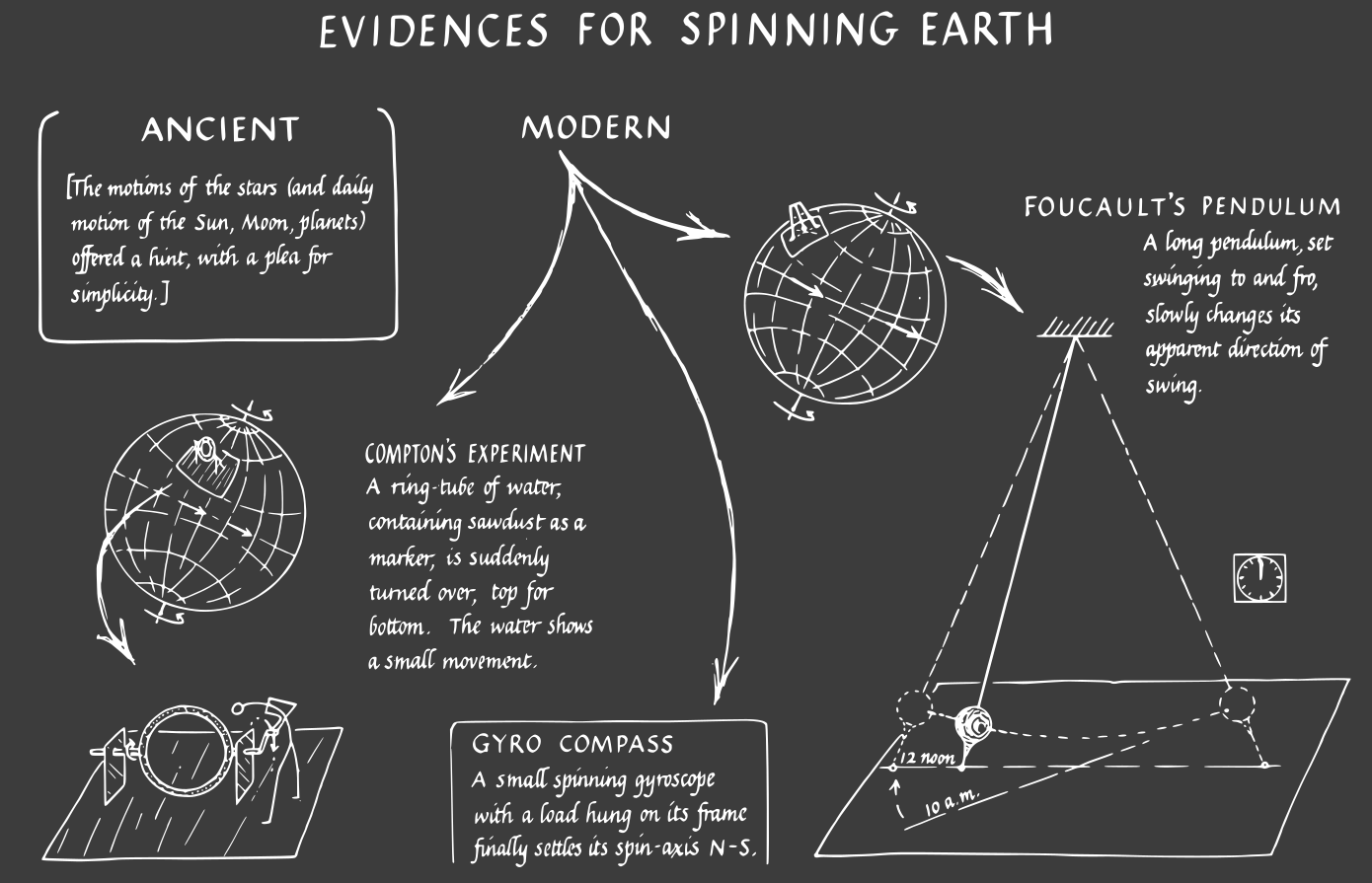 In an earlier post, we had discussed proofs of the round shape of the Earth. This included some ancient and some modern proofs. There was, in general, a consensus that the shape of the Earth was spherical and not flat and the proofs were given since the time of ancient Greeks. Only in the middle ages, there seems to have been some doubt regarding the shape of the Earth. But amongst the learned people, there was never a doubt about the shape of the Earth. Counter-intuitive it may seem when you look at the near horizon, it is not that counter-intuitive. We can find direct proofs about it by looking around and observing keenly.
But the rotation of Earth proved to be a more difficult beast to tame and is highly counter-intuitive. Your daily experience does not tell you the Earth is rotating, rather intuition tells you that it is fixed and stationary. Though the idea of a moving Earth is not new, the general acceptance of the idea took a very long time. And even almost 350 years after Copernicus’ heliocentric model was accepted, a direct proof of Earth’s rotation was lacking. And this absence of definitive proof was not due to a lack of trying. Some of the greatest minds in science, mathematics and astronomy worked on this problem since Copernicus but were unable to solve it. This included likes of Galileo, Newton, Descartes, and host of incredibly talented mathematicians since the scientific revolution. Until Leon Foucaultin the mid-1800s provided not one but two direct proofs of the rotation of the Earth. In this series of posts, we will see how this happened.
When we say the movement of the Earth, we also have to distinguish between two motions that it has: first its motion about its orbit around the Sun, and second its rotational motion about its own axis. So what possible observational proofs or direct evidence will allow us to detect the two motions? In this post, we will explore how our ideas regarding these two motions of the Earth evolved over time and what type of proofs were given for and against it.

Even more, there was a simple geometrical fact directly opposed to the Earth’s annual motion around the Sun and there was nothing that could directly prove its diurnal rotation. (Mikhailov, 1975)

Let us consider the two components of Earth’s motion. The first is the movement around the Sun along the orbit. The simplest proof for this component of Earth’s motion is from the parallax that we can observe for distant stars. Parallax is the relative change in position of objects when they are viewed from different locations. The simplest example of this can be seen with our own eyes.
Straighten your hand, and hold your thumb out. Observe the thumb with both the eyes open. You will see your thumb at a specific location with respect to the background objects. Now close your left eye, and look at how the position of the thumb has changed with respect to the background objects. Now open the right eye, and close the left one. What we will see is a shift in the background of the thumb. This shift is related by simple geometry to the distance between our eyes, called the baseline in astronomical parlance. Thus even a distance of the order of a few centimetres causes parallax, then if it is assumed that Earth is moving around the Sun, it should definitely cause an observable parallax in the fixed stars. And this was precisely one of the major roadblock

Earth moving around an orbit raised mechanical objections that seemed even more serious in later ages; and it raised a great astronomical difficulty immediately. If the Earth moves in a vast orbit, the pattern of fixed stars should show parallax changes during the year. (Rogers, 1960)

The history of cosmic theories … may without exaggeration be called a history of collective obsessions and controlled schizophrenias.
– Arthur Koestler, The Sleepwalkers

Though it is widely believed that Copernicus was the first to suggest a moving Earth, it is not the case. One of the earliest proponents of the rotating Earth was a Greek philosopher named Aristarchus. One of the books by Heath on Aristarchus is indeed titled Copernicus of Antiquity (Aristarchus of Samos). A longer version of the book is Aristarchus of Samos: The Ancient Copernicus. In his model of the cosmos, Aristarchus imagined the Sun at the centre and the Earth and other planets revolving around it. At the time it was proposed, it was not received well. There were philosophical and scientific reasons for rejecting the model.


First, let us look at the philosophical reasons. In ancient Greek cosmology, there was a clear and insurmountable distinction between the celestial and the terrestrial. The celestial order and bodies were believed to be perfect, as opposed to the imperfect terrestrial. After watching and recording the uninterrupted waltz of the sky over many millennia, it was believed that the heavens were unchangeable and perfect. The observations revealed that there are two types of “stars”. First the so-called “fixed stars” do not change their positions relative to each other. That is to say, their angular separation remains the same. They move together as a group across the sky. Imagination coupled with a group of stars led to the conceiving of constellations. Different civilizations imagined different heroes, animals, objects in the sky. They formed stories about the constellations. These became entwined with cultures and their myths.

The second type of stars did change their positions with respect to other “fixed stars”. That is to say, they changed their angular distances with “fixed stars”. These stars, the planets, came to be called as “wandering stars” as opposed to the “fixed stars”.

So how does one make sense of these observations? For the fixed stars, the solution is simple and elegant. One observes the set of stars rising from the east and setting to the west. And this set of stars changes across the year (which can be evidenced by changing seasons around us). And this change was found to be cyclical. Year after year, with observations spanning centuries, we found that the stars seem to be embedded on inside of a sphere, and this sphere rotates at a constant speed. This “model” explains the observed phenomena of fixed stars very well.
The unchanging nature of this cyclical process observed, as opposed to the chaotic nature on Earth, perhaps led to the idea that celestial phenomena are perfect. Also, the religious notion of associating the heavens with gods, perhaps added to them being perfect. So, in the case of perfect unchanging heavens, the speeds of celestial bodies, as evidenced by observing the celestial sphere consisting of “fixed stars” was also to be constant. And since celestial objects were considered as perfect, the two geometrical objects that were regarded as perfect the sphere and the circle were included in the scheme of heavens. To explain the observation of motion of stars through the sky, their rising from the east and setting to the west, it was hypothesized that the stars are embedded on the inside of a sphere, and this sphere rotates at a constant speed. We being fixed on the Earth, observe this rotating sphere as the rising and setting of stars. This model of the world works perfectly and formed the template for explaining the “wandering stars” also.
These two ideas, namely celestial objects placed on a circle/sphere rotating with constant speed, formed the philosophical basis of Greek cosmology which would dominate the Western world for nearly two thousand years. And why would one consider the Earth to be stationary? This is perhaps because the idea is highly counter-intuitive. All our experience tells us that the Earth is stationary. The metaphors that we use like rock-solid refer to an idea of immovable and rigid Earth. Even speculating about movement of Earth, there is no need for something that is so obviously not there. But as the history of science shows us, most of the scientific ideas, with a few exceptions, are highly counter-intuitive. And that the Earth seems to move and rotate is one of the most counter-intuitive thing that we experience in nature.
The celestial observations were correlated with happenings on the Earth. One could, for example, predict seasons as per the rising of certain stars, as was done by ancient Egyptians. Tables containing continuous observations of stars and planets covering several centuries were created and maintained by the Babylonian astronomers. It was this wealth of astronomical data, continuously covering several centuries, that became available to the ancient Greek astronomers as a result of Alexander’s conquest of Persia. Having such a wealth of data led to the formation of better theories, but with the two constraints of circles/spheres and constant speeds mentioned above.
With this background, next, we will consider the progress in these ideas.
A stabilised image of the Milky Way as seen from a moving Earth.