Recently I saw the movie Laal Kaptaan (लाल कप्तान, literal translation Red Captain). Though I had seen the trailer when it was released sometime back this year, I did not see the movie. The visuals in the trailer were quite good, so I decided to finally watch it. And I was not disappointed. This is one of the few movies in recent times that I have managed to see in one shot. Or rather the movie managed to make me do it.

The major part of the movie is set in the region of Bundelkhand (literally the dominion of the Bundelas). This region which falls South-East of Agra and Delhi has historical places like Jhansi, Gwalior, Panna, Chhatarpur, Banda and Orchha within its folds has been historically important. The province of Awadh (Oudh) lies to the east of Bundelkhand and Ganges marks the boundary to the East, while the Rajputana lies to the West. The Yamuna divides the region into two, with the majority of the part lying to the West of Yamuna. The region between the two mighty rivers is known as a doab (marked yellow in the map below). Many of these were erstwhile princely states, which also existed until 1947, when they were merged with the Indian republic. 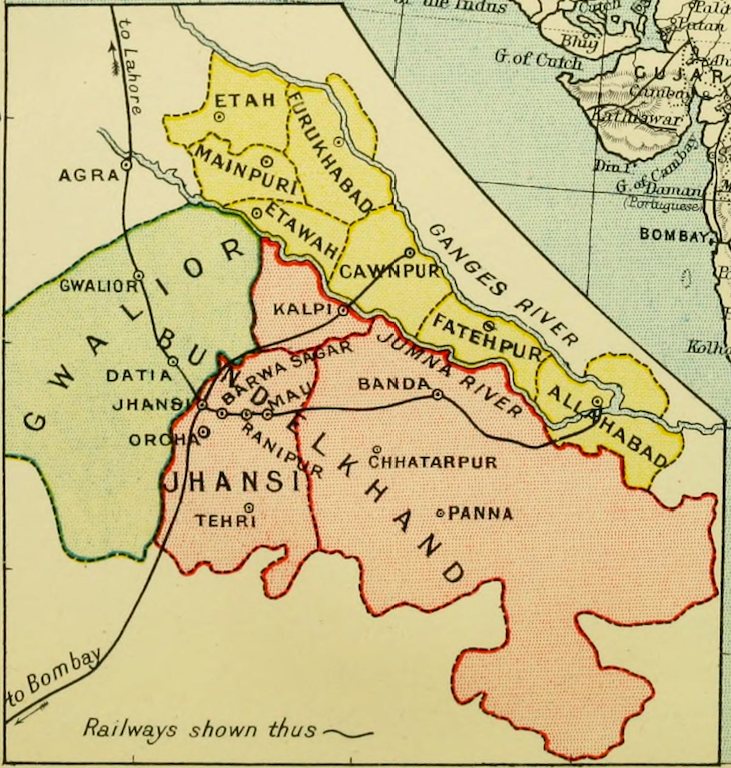 The era when the Mughal empire was disintegrating post the death of Aurangazeb in 1707, was especially tumultuous for this region. With the power vacuum created by the decaying Mughal empire being filled by the Marathas, by this time the Chatrapati was only a titular head and real power rested with the Peshwas and the various great houses of the Marathas (Shinde, Holkar, Bhosle, Gaikwad). The Marathas laid waste to large tracts and levied chauth ( collection of one-fourth of income ) on these regions mercilessly. But in general, they were hated in this region for their bullishness and general havoc they perpetrated on the public and places. For example, they looted the Red Fort in Delhi with impunity, scrapping off precious and semi-precious stones from the Diwan-e-Khaas to do a vasuli. (I might make a dedicated post for this later.)
If the Battle of Plassey (1757) was the founding stone of the British in India, then the battle of Buxar (1764) was the first real fortification of this foundation, and the British really established themselves in India as a potent force. Though the Marathas were the most powerful, the British did not engage with them directly until the end of the century. The third Battle of Panipat (1761), a few years before the battle of Buxar limited the Maratha presence in the North severely and was one of the major reasons that led to its full demise as a political and military power by the start of the next century. Though, this enabled the houses of Shinde, Holkar, Bhosle and Gaikwad to establish their own semi-independence over the Peshwas. Eventually, everyone became under the British. But the time in which the movie is set, the Marathas were still a force to reckon with and the EIC has just established itself as a millitary and political power in much of the region from Bengal to North India along the Gangetic plains.
The movie starts just after the Battle of Buxar (1764) when a large number of people are hanged outside the fortress of Shergarh (most probably a fictional place, as I could not find it anywhere in the sources). after the British win the battle. One of the persons who sides with the British named Rehmat Khan is especially despised upon, with him being called a gaddar (traitor) by the hanged. The accused are hanged on a huge banyan tree, with their bodies hanging like overgrown fruits along its branches. It is raining and in this scene, a young teenage boy promises Rehmat Khan that one day he will also hang on the same tree.
Fast forward 25 years (1789), we are taken to the den of a dacoit (डकैत /डाकू ) where the Bairagi called by another generic name Gossain (this term I had not heard before this film). He comes in and asks for fire for his chillam. Mayhem ensues and the hunter takes his prey. The entire scene starts with dark of the night and ends in the early morning.
The horde of warrior ascetics (of which were the Gossain/Naga) came to prominence in the resulting political instability and shifting sands post the fall of the Mughal empire.

…these orders became politically significant only after the collapse of the Mughal Empire, and more particularly after British activities created political and economic chaos in the second half of the eighteenth century.

Going forward, the hunter goes on to take his reward, where the local chieftain mocks him and doesn’t want to pay. He is made to pay by the Gossain. The film then follows the Gossain on his quest to locate and kill Rehmat Khan. Though there are hints that there is a link between the Gossain and the teenage boy who is hanged in the beginning, we are not sure how they are connected. I won’t go into the plot of the film, but will instead focus on some of the characters and background of the film.
Though some of the other reviews have portrayed the character of Rehmat Khan (played by Manav Vij) as just grunting. But I think he played the role very well, perhaps these reviewers are used to seeing villains as people who yell and show a lot of emosions on their faces. He subtly played the act of a cold-blooded, calculating and cruel character quite well and was never out of character. Rehmat Khan is a Rohilla. Now, the Rohillas were of an Afghan ethnicity, and they sided against the Marathas (led by Najib ad-Dawlah) with Ahemdshah Abdali during the third battle of Panipat. The Marathas were very enraged by this and Mahadji Shinde did collect his revenge on them a few years in 1772 after Panipat by destroying Rohilkhand and scattering bones of Najib ad-Dawlah. After this defeat, the First Rohilla war happened in which the British siding with the Nawab of Oudh defeated the Rohillas and the state of Rampur of established. The second Rohilla war, in 1794, between British and the Rohillas ended their supremacy in the region. Now, the time between the two wars, there was lot of guerilla activity carried out by the Rohillas, which led them to be set as Nawabs of Rampur. Given all this chaos and uncertainty,  there were no permanent alliances or allegiances. The main part of Laal Kaptaan (c. 1789) is set in this era for the Rohillas. So, Rehmat Khan, a prominent Rohilla, defecting over to British was noteworthy, but not out of the line.
Pindaris

Pindaris were not a tribe, but a military system of bandits of all races and religions. They fluctuated in numbers, being augumented from time to timeby military adventurer from every State, and frequently amounted to as many as 30,000 men.

Pindaris present an episode in history of India, which is quite extraordinary, though skimmed upon in the history texts. Here we are witnessing a rise of a band of people whose existence was based on terrorising and looting people in distant provinces.  The Pindaris were roughly active in the last three decades of eighteenth century to the first two decades of nineteenth. Earlier they were under tutelage of Maratha cheiftains who used them as militias to wreck havoc on supply lines of the enemies and disrupt civilian peace. So them accompanying the Maratha camp is completely normal. The depiction of the Pindari lust for the loot (tum log lo khazana, mai chala lene zanana) is well done in the film. In fact, the comedy of errors that the bunch sent to hunt down Rehmat Khan is something to relish. The frustration of the little Maratha knight in being unable to  control them is well worth seeing.
But as the Maratha power came to a decline, the Pindaris in the nineteenth century became a force of their own, without masters. They would raid far, and were viscious and cruel in their tactics to make people pay. There are reports that people even committed suicides when they came to know that a Pindari raid was imminent.
Another thing worth mentioning in the film is the settings in which the film is shot. The cinematography is par excellence, set amongst fantastic fort ruins. I cannot identify the actual locations used in the film, so any information on that would be welcome.

The other character in the film worth mentioning is the Dog Walker played by Deepak Dobriyal. He has a pair of very fine Mudhol hounds (also known as Caravan hounds) named Sukhiram and Dukhiram.

The character has no name in the film, but he finds people who are wanted for a price. That is how he makes his living. He refuses a horse mount saying it interferes with  His character has many layers and he shares a special relationship with the Gossain, they respect each other. It was a treat to watch Dobriyal play this character with English hat and his greeting of:

The two female characters in the film, one played by Zoya and other by Heena are in their niche. Zoya as a courtesan who is neglected, while Heena playing the wife of a chieftain carries herself well. Their characters are in emotional turmoil with maternal love and the surrounding situation. 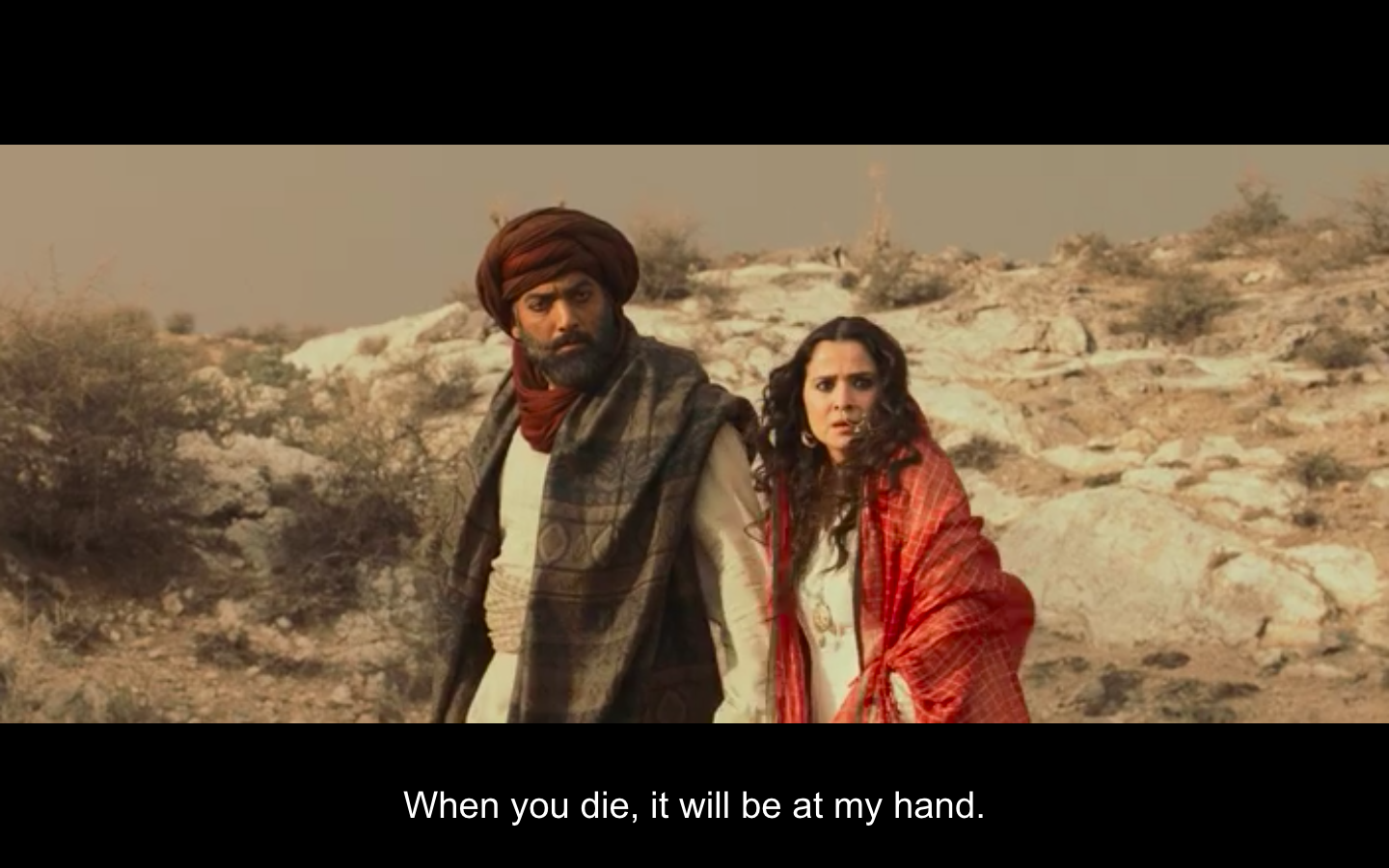 The clothing, the artefacts are all era-appropriate and so are the languages used. A lot of work must have gone in background research and it shows in the quality of the film. Kudos to the production team for that. Just that the look of Saif has a semblance to Depp’s Jack Sparrow, that could have been avoided.
Overall a very watchable film, if you have not, do watch it.

PS: A special ode to Saif Ali Khan.
In my personal opinion, Saif Ali Khan has really matured as an actor over the years and has earned my respect for it. You can’t really compare his role in Yeh Dillagi and lets say his depiction of Langda Tyagi in Omkara. It is as if you are watching two completely different actors. The variety of roles he has done in recent times, and with grace is just amazing. He has done roles which many of the mainstream actors would shy away from. Hope that we see his good form in the future also.