Continuing with our last post, about the monsoons this is another entry from The Charm of Bombay, an anthology of writings in praise of the first city in India (1915) edited by Rustomji Pestonji Karkaria 1869-1919. 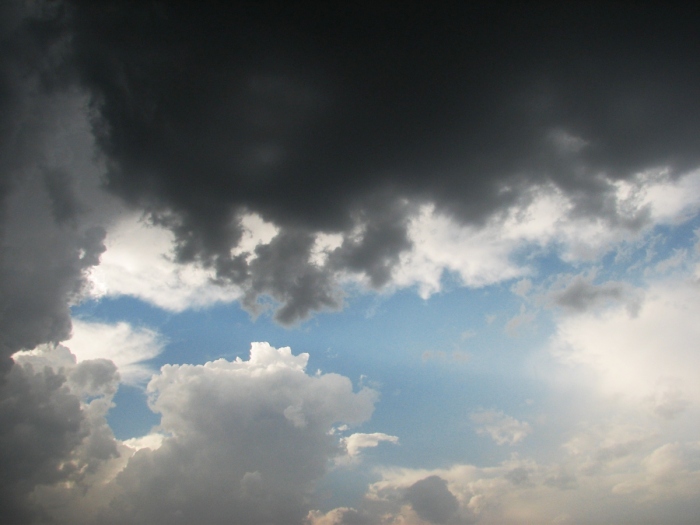 In the afternoon sullen thunder began in the North-west, where clouds had all day been gathering in towering piles. As they thundered the clouds moved slowly down across the North Konkan, and about four o’clock gathered against the jagged crest of Bava Malang. To the North, and all along the Bava Malang range the sky and land were filled with lurid clouds, thunder lightning, and rain, the Kalyan river flowing back as ink through a scene of the most striking – desolation and gloom, South of this abrupt line of storm, the country from Bombay to Khandala was full of pure calm light. Every village, every hut, every road and forest-track, even the bridge over the river at Chauk, came clearly into view. The trees and groves looked magically green; and the light picked out the most hidden streams and burnished them into threads of molten silver. The Panvel and Nagothana rivers shone like mirrors, and the sea was scored with bars of vivid sunshine. Suddenly at about five, the storm-rack poured over Bava Malang like a tumultuous sea, and swept into the deep valley between Matheran and Prabal with furious blasts and torrents, awful thunder, and flashes of forked lightning. When the clouds had filled the valley, the rain and wind ceased and the storm stood still, and, in dead stillness, the thunder and lightning raged without ceasing for an hour. The thunder mostly rolled from end to end of the valley, but it sometimes burst with a crash fit to loosen the bonds of the hills. At six o’clock the storm again moved and passed slowly south over Prabal towards Nagothana. Another enchanting scene opened in the South. Every hut, tree and stream grew strangely clear, the rain-filled rice fields and rivers flashed like steel, while fleecy clouds lay on every hillock and slowly crept up every ravine. As the sun set behind Bombay the air was filled with soft golden light. Westwards towards Thana the hill-tops were bright with every hue from golden light to deep purple shadow, while, among them, the winding Ulhas shone like links of burnished gold. Then, the moon rose, brightened the mists which had gathered out of the ravines and off the hills, and cleared a way across the calm heavens, while far in the south the black embattled storm-rack belched flame and thunder the whole night long. The next day (Tuesday) passed without a storm. On Wednesday, the 8th, eastwards towards Khandala vast electric cloud banks, began to gather. At two in the afternoon, with mutterings of thunder, the sky grew suddenly black and lurid. At half-past two the storm passed west moving straight on Matheran. A mist went before the storm, thickening as it came, first into trailing clouds and then into dripping rain, with muttering thunder all the while. At three the valley between Matheran and Prabal was filled with storm. Thunder rolled in long echoing peals, and flashes lightened the dense fog with extraordinary splendour. The fog lasted with heavy rain till 3-45, when a light wind swept it west towards Bombay, where about four the monsoon burst. These appalling electric outbursts end serenely. The storm clouds retreat like a drove of bellowing bulls and their last echoes die beyond the distant hills. The sun shines again in majesty, in every dell the delicious sound of running water wakens life, and the woods are vocal with the glad song of birds.